Readings From the Tenement Museum

An acquaintance of mine informed me about free events coming up at the Tenement Museum including a poetry reading in recognition of National Poetry Month. That same night, there is also a talk about sex and sin that sounds interesting.

For those in the New York metropolitan area, you may want to check out them and other free public events. Keeps the mental juices flowing.
Posted by Matt Sinclair at 1:32 PM 1 comment:

Don't worry, dear readers, subscribers, and followers. I've not fallen off the same cliff as the U.S. economy, science reporters, and little bits of dirt and rubble.

I've just fallen into the Daddy Zone. Not much time to do things as I used to. Even this brief missive is squeezed in between tasks.

But I promise to return very soon, hopefully with good news about looking for an agent and working on the new novel.
Posted by Matt Sinclair at 1:47 PM No comments:

A Portrait of the Artist as a Real Man

Ok, this is old news by now, but I still think the whole Shakespeare portrait story was pretty cool. To think that such a painting was simply hanging in some wealthy family's home boggles my mind and makes me wonder what else is out there, waiting to be discovered.

I'm not expecting anyone to find the Holy Grail — neither literally nor metaphorically — but it would not surprise me to read about a long lost writings by Mark Twain or Emily Dickinson. I bet there's the equivalent of another few dozen clay pots full of Jesus-era writings tucked inside a long-forgotten cave or tomb in Israel somewhere. It's happened before, so why not again? Again, I'm not expecting new gospels or major discoveries, but neat old stuff. An autographed original of Milton's Paradise Lost, perhaps?

Historical discoveries help counterbalance contemporary idiots like "Octomom." (Note to the Newsweek reporter: No, we weren't wrong. The woman's insane.) I'm not convinced the world needed her right now. Wait until the economy recovers, Octomom, before you look to capitalize on your 14-strong brood. (I'm confident most literary agents understand she's not going to have an audience for a memoir.)

I look at the face in that portrait of the man we believe to be Shakespeare and wonder what he'd blog about, who he'd follow on Twitter, what he'd think of contemporary society.... The man in the portrait appears to be of his time; I'd expect Willy Shakes to be a multimedia superstar today. Writer, producer, actor, director ... a veritable Roger Corman. ;-)
Posted by Matt Sinclair at 10:04 PM 2 comments:

And if I've posted that incorrectly, I'll update it. This 21st century social-networking communication is still a little new to me.

UPDATE: I'm gathering up lots of new followers on Twitter, which I greatly appreciate. For those who're new to tweets, I'll be sending out info that I find interesting to readers, writers, and other literate folks whose IQs are at least above 100, and I'll let people know about the posts I place here in my little corner of the blogosphere.
Posted by Matt Sinclair at 10:25 AM No comments:

So, what good books have you lied about reading? According to a recent Reuters article, nearly two-thirds of Britons surveyed have lied about having read particular books. Their most popular book to lie about is George Orwell's classic 1984. (I swear) I re-read that after the start of the War in Iraq in 2003, to remind myself about the concept of doublethink. Other popular unread books were War and Peace by Leo Tolstoy and James Joyce's Ulysses.

I don't know what books Americans have lied about reading. Anyone care to venture the books you've falsely claimed to have read?

It's amazing what slides in under the electronic door! In my elephantsbookshelf@gmail.com mailbox, I received a very nice note from the assistant producer of KQED, the public broadcasting network in San Francisco.

He wanted me to share with my wonderful readers (and followers!) that Christopher Moore recently stopped by their studios to record a chapter from Fool.

Having read the book, I know that it's a lot of fun (perhaps a bit too bawdy for some, but in a past life I was a groundling.) I'm going to check it out, if for no other reason than to hear what Christ Moore's voice sounds like.

Have fun, fellow Fools.
Posted by Matt Sinclair at 10:06 PM No comments: 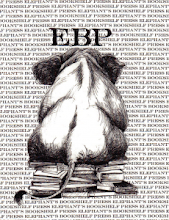